Spanish art is internationally recognized for its variety and quality. The world echoes personalities such as Salvador Dalí and the Surrealists, Pablo Picasso and Cubism, Miguel de Cervantes and his Quixote or Federico Garcia Lorca with plays such as Bodas de Sangre or La Casa de Bernarda Alba.

The reason behind this cross-border influence comes through various channels. Spanish art is renewing, prolific and polyphonic, vibrant and timeless. A type of art that interacts and is placed into different worlds and realities, spreading with force a certain aesthetics. Paintings such as El Guernica or Las Meninas, composers such as Paco de Lucía or writers such as Miguel de Unamuno continue to evoke unlimited feelings in the spectator and to be applauded all over the world.

Our art section is going to run between overlapping periods. We will walk through the roots of the recognised Spanish talent, we will see the classics of our literature and their authors, the great musical titles, the most emblematic buildings, as well as the different artistic periods of the art of our country.

We will keep walking by greeting our contemporaries through our most international cinema, the most known festivals or the most acclaimed dances. We will try to recreate the artistic scenario in our borders and also, the one abroad that carries a bit of our identity, with works of authors settled outside the territory.

Spain is a country that attracts millions of tourists every year, visitors who come seduced by the sun, the gastronomy, the art, the language, etc. In this rush of coming and going, it is of upmost importance that travelers get a deep taste and create an emotional bonding with our culture. The dissemination of Spanish culture is one of the aims underlying the work of many institutions in our country and we join this cause with our sections.

We want to put at your disposal the richness, diversity and creativity of the Spanish heritage. We would be delighted if, through these articles, you could appreciate deeper the marvellous art of Spain. We are sure that will help you to assimilate the language better. 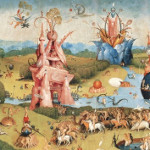