Who has ever checked a gastronomy blog? If your answer to this question is “me”, and you are also interested in learning Spanish, then you are going to like this section on Spanish gastronomy. Spain is characterized by its cultural and linguistic richness. Spanish is considered to be the second most spoken language in the world and there are 500 million Spanish speakers according to the report “El español. Una lengua viva” [“Spanish. A living language”] made by the Instituto Cervantes.

For millions of tourists around the world, gastronomy has become a central part of the tourist experience, and this places Spain as the best place to go. There is a popular saying that refers to the importance of good food in our land. We can’t forget that, undoubtedly, cooking is an inherent element of our culture. Perhaps, you have heard the colloquial expression “the way to people’s heart is through their stomach”, referring to unconditional love for a country’s cuisine. So much so, that it is considered a weapon of seduction. In our dishes, we mix the new and the old, the exotic and the typical. For us, sitting at the table is much more than simply sharing a meal, it’s connecting, getting closer, it’s an excuse to start getting to know each other.

The gastronomy of Spain, also known as Spanish cuisine, is a set of techniques when preparing dishes, which has generated a very particular subculture marked by the never-ending creativity of its participants. Our food mixes the traditional and creative cuisine of chefs who are internationally recognised thanks to their flavours and imagination. That is what is known as modern or contemporary cuisine. However, what really makes our gastronomy special is the plurality and variety of products existing in the different regions of Spain. Our common wisdom coexists with the current curiosity of our chefs and gastronomic researchers. The authentic flavour of Spain is born at this crossing of perspectives.

Learning Spanish through our gastronomy will give you the opportunity to add healthy and vital aspects to your routines. The first of these will be to acquire good eating habits through the Mediterranean diet. The Mediterranean diet is included in the ranking of the best diets in the world, and is also the favourite of celebrities. You will acquire the typical gastronomic and cultural knowledge of the country and be able to share this with your friends. In addition, you will learn about environmental sustainability, economy and our food. Learning about our gastronomy is very useful.

We hope you enjoy this section as much as we do. Sitting at the table together is going to be quite an experience. 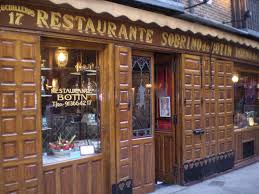